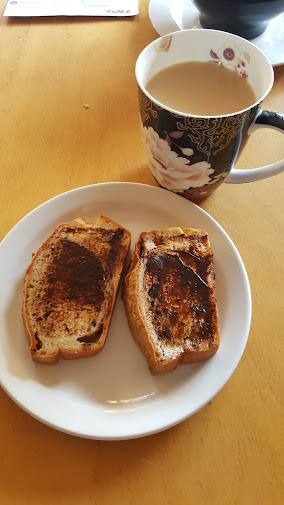 It is the holy grail of all food items when you go gluten free: Bread. We eat so much of it prior to finding out it makes us sick. We’re accustomed to the taste, the soft fluffiness of it, the chewiness of it… and then gluten free is ordered. The world is over for a while and then the hunt for the perfect, actually edible, gluten free bread is on.

I think I’ve found it!

For those of you who have never had to eat gluten free allow me to enlighten you to what our options generally consist of:

In short, not so great. Especially for someone like me. I bake. I’ve been baking my own breads for well over a decade and I enjoy it. And then they added dairy intolerance to the mix and it was all over for me. Until I got the recipe for that bread.

The Best Gluten Free and Dairy Free Baking Recipes by Grace Cheetham has become my bible and the basic white bread recipe is my fav. It is worth the cost of the book alone ($15 from Amazon US as a hardcover or $6.35 for Kindle), but the rest of it is pretty damned good as well.

The recipe is fairly simple, though calls for a number of flours, and I’ve taken to making up a massive batch of the base flour in advance to keep in the cupboard. I make this most weekends and keep what survives the weekend in the fridge at work for toast. Like all fresh breads it needs to be kept in the fridge after the first 2-3 days or it gets mouldy.

I’m not going to lie and says it’s a perfect soft and squishy bread. It’s not. What it is, however, is a bread that tastes like bread, that isn’t too heavy or prone to crumbling the minute it cools down. It tastes and has a mouth feel a bit like a heavy sourdough. It’s soft on the inside with a crisp-chewy crust. After the second day it benefits from being toasted or warmed somewhat.

And!!!… The Wild One, Buck and other dear friends who can have gluten have also given it the thumbs up as a fresh bread.

This site uses Akismet to reduce spam. Learn how your comment data is processed.